After a forced closure due to social distancing requirements, the Empire Theatre in Toowoomba has struck back at Covid 19 reopening to a series of small performances promoted as The Empire Strikes Back. As a Star Wars fan, I love the title. It’s very apt. But this post is not about Star Wars but the long awaited return to live theatre in Toowoomba.

We have never seen Mamma Mia on the stage – only the two film versions, so it was a great opportunity to see it performed live. We still love listening to ABBA. Björn and Benny were great songwriters and their music is still great to dance to. Even Dan knows who ABBA is, although it has taken a little practice for him to learn to say their name correctly – ABBA not A B B A. 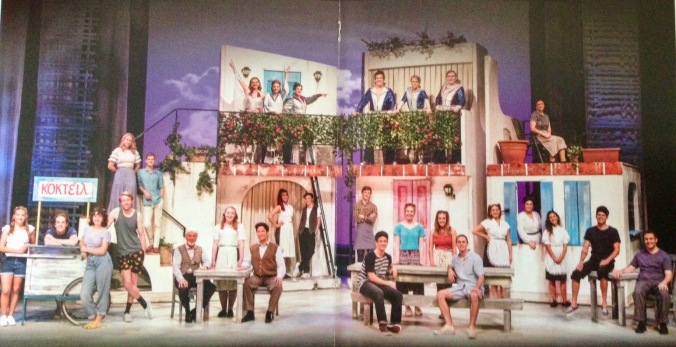 It was a fabulous, high energy show and many people in the audience just couldn’t resist singing along. It is hard to pick the best moments but the tog wearing, flipper cladded boys and the Lycra encore are definitely my top two favourites. We didn’t know at the time that it would be one of the last shows performed at the Empire Theatre before Covid 19 put an end to the performing season. We have always enjoyed going along to the occasional show at the Empire, so the Covid 19 closure dealt a blow to our community.

But you can never put a good venue down.

In June the Empire Theatre, with financial support from the Queensland Government,  announced their  return to live performances with The Empire Strikes Back series. It is a series of shows with a limited audience, to comply with social distancing rules, but with live streaming opportunities. Keen to support the Empire Theatre and the arts community in any way that we could, we immediately decided to attend at least one of the shows and bought tickets for the live stream of Camerata.

Camerata is a performance by the Queensland Chamber Orchestra. Last year we thoroughly enjoyed the performance by the Queensland Symphony Orchestra but we had never seen the Chamber Orchestra. Camerata is an Italian word that means chambered, which in turn comes from the French word “chambre”, meaning a small room. A Chamber Orchestra may only have up to 50 musicians so it is able to play in a room, whereas a full orchestra could have up to 100 musicians, thus requiring a large concert hall. There is an interesting article here that explains more about the different kinds of orchestras.

The program for the evening was as follows…

One of the surprises for the night was the appearance of one of Bec’s music lecturers from USQ as a special guest, performing the song Fields of Gold. The Queensland Chamber Orchestra quite often work with musicians from outside the traditional classical music world, but it is always a surprise when it is someone you know, or in Bec’s case, someone you see every week on campus. He had never said a word to the students, but then musicians are often involved in a lot of different projects.

Unfortunately due to a slight technical hitch we missed the first ten minutes, however it was a lovely performance and we are keen to see them live some time in the future. The arts community has been hit hard by Covid 19 but the option for live streaming opens shows up to a wider audience. The live stream tickets are quite affordable and further information about other shows is available here. We look forward to returning to the Empire Theatre and the experience of live music and theatre very soon.

Music gives a soul to the universe,

wings to the mind,

flight to the imagination,

and life to everything.

3 thoughts on “The Empire Theatre Reopens”