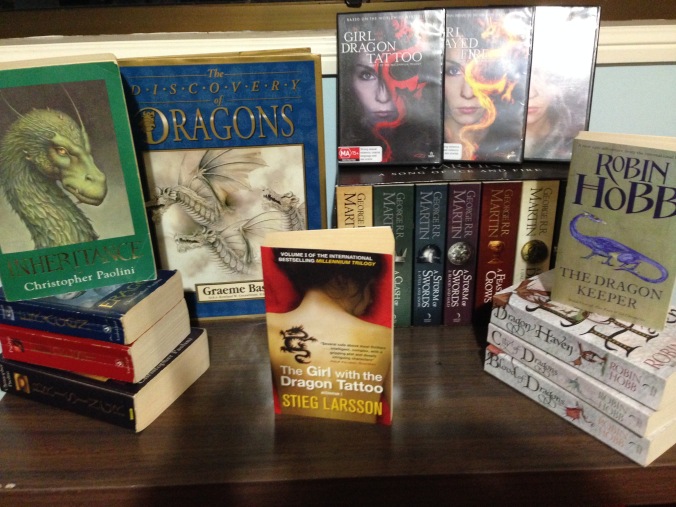 It’s quite possible that this dragon themed post is inspired by our recent burst of cold weather. This morning was one of those days when you would rather stay in bed and seriously consider hibernation. Do dragons hibernate? Smaug seemed to have slept for a long time before desolating Laketown in fire and ash. At least our fire is kept well contained, radiating heat and filling the house with warmth. Fire and dragons just go together.

We often hear the phrase, “Here Be Dragons”  in movies and literature, referring to dangers located on old maps. While there was a practice of illustrating old maps with images of dragons, sea monsters and other mythical creatures, the phrase itself was not generally used, except on one map called the Lenox Globe. This map is dated around 1500 and it is thought the phrase might refer to the Komodo dragons in the Indonesia Islands.

While there might not be any real dragons, it’s interesting to see how often they pop up in mythology and fantasy literature. From Tolkien to Paolini and George R.R. Martin, we seem to have an affinity for those fire breathing creatures, and the picture above features just a sampling of our dragon themed reads.

The idea for a dragon theme started with Stieg Larsson’s The Girl with the Dragon Tattoo. I picked this book up at a garage sale and it sat on my shelf for quite a while, but once I started reading, I was hooked. Just to make it clear, there aren’t actually any real dragons in the Millennium Series except for Lisbeth’s tattoo, but I have loved the series all the same. After reading the first book, I quickly tracked down the rest of the series and then had to wait impatiently for each instalment. Personally I think David Lagercrantz, who has continued writing the series after Larsson’s death, is the better writer, but Larsson certainly created a terrific protagonist in Lisbeth Salander. She is smart, sassy and rebellious. I just loved her from the start.

“With the spiky and sassy Lisbeth Salander…Larsson created the most original heroine to emerge in crime fiction for many years…” (Boyd Tonkin, Independent)

While I was thinking about how to snap Lisbeth and her dragon tattoo, I started to think about dragons, wondering if we had any lurking around somewhere – sadly no – but then I remembered Games of Thrones by George R R Martin, and the Inheritance Cycle by Christopher Paolini and The Rain wild Chronicles by Robin Hobb, and I could have even added The Hobbit by J.R.R. Tolkien and the list goes on…

I don’t think our love affair with dragons is going to end any time soon.

5 thoughts on “#BookSnapSunday – Here Be Dragons!”