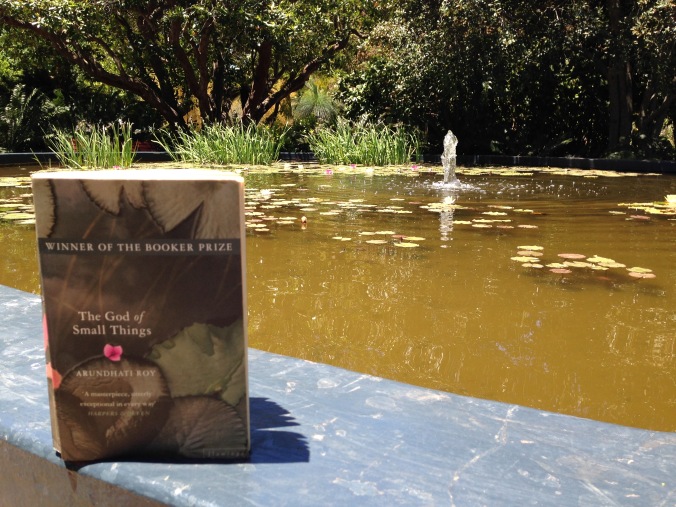 This week I’m borrowing an idea from Sharon from Gum Trees and Galaxies, who used the beautiful pond at Laurel Bank Park for her snap of Claude Monet’s Mad Enchantment a few weeks ago. The floating water lilies and reeds was the perfect backdrop for Arundhati Roy’s debut novel, The God of Small Things, which was awarded the Booker prize for 1997.  Set in India, the novel tells the story of a multi-generational family, from 1969 to the early 90’s. It is a time of change, however… “Change is one thing. Acceptance is another.”

Beliefs about caste, especially about the relations between the Touchables and the Untouchables, run very deep. “The Love Laws lay down who should be loved. And how. And how much.”  The price for crossing the line is very steep.

Much of the story focuses on twins Rahel and Estha, whose lives are irrevocably changed by a complicated mix of malice, violence, cultural beliefs and social discrimination. Rahel and Estha are two-egg twins, unalike yet sharing a “siamese soul.” Separated for 23 years, they bear the guilt for a sin they never committed.

“You’re not the Sinners. You’re the Sinned Against. You were only children. You had no control. You are the victims, not the perpetrators.”

Their mother, Ammu, is a woman “already damned.” After a foolish marriage to escape “the clutches of her ill-tempered father and bitter, long-suffering mother” resulted in divorce when her husband turned out to be “a full-blown alcoholic with all of an alcoholic’s deviousness and tragic charm”, she knows for herself “there would be no more chances”. But Ammu has “little left to lose, and could therefore be dangerous.”

His father, though, is still an “Old World Paravan”. He remembers the days of crawling backwards and “sweeping away their footprints so that Brahmins or Syrian Christians would not defile themselves,” and covering their mouths “to divert their polluted breath.” His gratitude to Ammu’s family for their benevolence and generosity, “widened his smile and bent his back.”

Velutha’s quiet assurance, pride and sense of worth disturbs his father’s entrenched beliefs about caste segregation but when he realises his “Untouchable son had touched…entered…loved” what he had no right to touch or love, the Terror is unleashed.

The God of Small Things is a somewhat complicated narrative, moving between past and present without the usual text markers so it does require the reader to pay careful attention, however the rich imagery used by Roy brings all the sights, sounds, tastes and smells of India and the passing seasons to life. It reminds us that it is the small things that can bring about massive change and that things can change in just one day.

4 thoughts on “#BookSnapSunday – The God of Small Things”