So far, on our Big Red Bash adventure, we have followed The Adventure Way, been sobered by the tragic tale of Burke and Wills and the Dig Tree, and been quietly impressed by the revival of the Betoota Pub. After four days of travelling the outback roads of Queensland, we rolled into Birdsville – two days ahead of schedule! This turned out to be a good thing.

As we drove in past the town sign, we couldn’t help but see 4WDs and caravans pulled up and camped – everywhere! Birdsville is a small outback town – a very small outback town. The population only numbers a little over 100. Except for two events in the year, when it explodes to about … 7,000 (+/-). The Big Red Bash is the first event and the Birdsville Races, held in September, is the second.

With such an influx of visitors the town’s resources are stretched to the max and beyond. You quickly get used to lining up – for fuel, for bread, for pies and just about everything else. When we arrived in Birdsville on Friday, we had very little trouble fuelling up and booking into the Caravan Park. But by Sunday afternoon – it was a different story. The line of incoming vehicles stretched out along the main road, out past the bridge and out of sight. This was the line up for the fuel station. Only thing was – the town had run out of fuel. People just had to wait in the line for the fuel tanker. I think the whole town heard the cheer go up when it finally arrived. 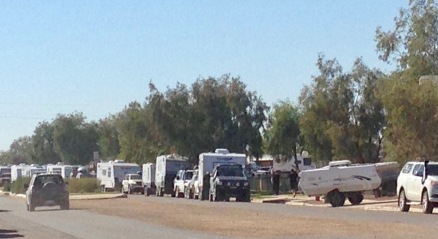 As the Big Red Bash only started on Tuesday afternoon, we had a few days to explore Birdsville and socialise with the other Bashers camped in the Caravan Park. One of the good things about a town as small as Birdsville is that you can walk everywhere. In fact, with so many vehicles everywhere, it was probably quicker to walk anyway.

The Bash organisers had set up a registration and merchandise centre in the middle of town. So on Saturday morning we strolled down and joined the line to register, get our wrist bands and entry sticker for the car. Then we lined up to get some merchandise. After coming all this way, we wanted some proof of our adventure, and who knows if we would get the chance to come again. I was impressed at how well it was organised. A display area had been set up where you could look at everything, check sizes and so on, and once you had made your choice, one of the attendants would check things off on a list. Then you lined up with your list to collect the merchandise. Then you joined the line to pay for the merchandise. It was actually pretty streamlined. 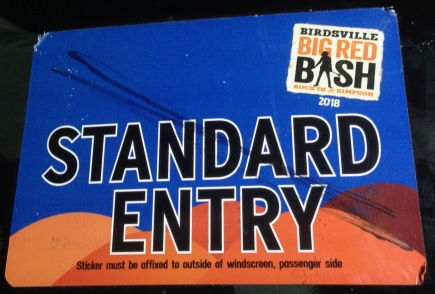 Then we took a walk around town and joined the line streaming out of the Birdsville Bakery. Every morning there was a long line of people queueing up for freshly baked bread. This time we were lining up for camel pies.  Yes, I did say “camel” pies.  The Birdsville Bakery has a reputation for their camel pies. Are they really made from camel? Apparently so, and they tasted pretty good.

Of course, you can’t go past the Birdsville Pub. You need to at least step through the doors into the bar and look up. See the hat collection attached to the ceiling! With so many visitors in town, patrons needed to eat in shifts for the evening meal.

Another building well worth seeing is the Australian Inland Mission Hospital Museum which has a good display of medical equipment and photos of Birdsville’s history. The hospital was once housed in the Royal Hotel which was built in 1883. The hotel is now heritage-listed and its ruins are pictured below. 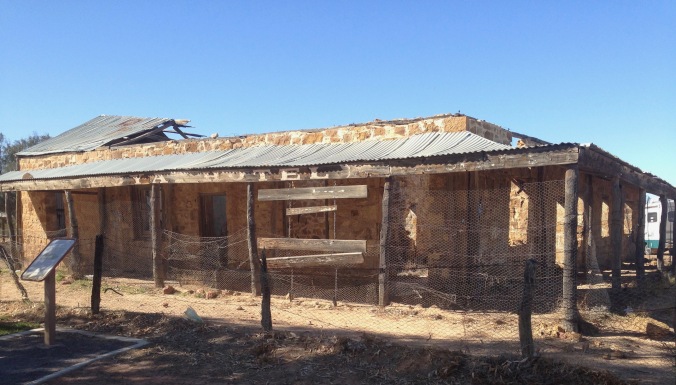 Despite the pressure that a population explosion places on a town like Birdsville, events like the Big Red Bash and the Birdsville Races are critical for the survival of outback towns. Okay, so the town ran out of fuel, and out of bread, and out of pies, but as tourists, we didn’t mind having to line up. It’s all part of the Bash experience and it gives us plenty of time to chat with each other as we wait. Besides, we’ll have to do plenty of lining up out at the Bash. That’s we’re headed next.